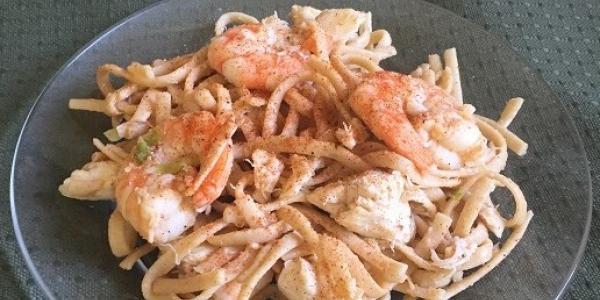 Cook linguine until al dente. Drain in colander, then chill noodles in cold water, drain and set aside.

Heat butter and olive oil in pan. Add garlic and let cook for one minute. Stir in Cajun seasoning. If using raw shrimp, add shrimp to pan and cook until just pink and opaque, about two to three minutes. Remove shrimp and set aside.

Add wine to pan and cook until liquid is reduced by half. Add green onions, noodles, shrimp and crabmeat, and heat through.

Season with salt, pepper, and additional Cajun seasoning to taste.

Shrimp are sweet and succulent, delicate and delicious. No wonder Bubba (of Forrest Gump-fame) referred to shrimp as “the fruit of the sea.” However most shrimp found in today’s supermarket are not plucked from the sea. Most are farm-raised in ponds and tanks, making this popular delicacy more affordable.

The vast majority of shrimp have been frozen even when they look fresh. Your best bargain for cost and quality are specimens that are IQF (individually quick frozen). These are sold in packets in the frozen food case. Shrimp are sized by a number called “u-count.” The u-count tells you how many shrimp it takes to make a pound. For example, “21-25” has 21 to 25 shrimp in one pound.

Shrimp aficionados cook and serve shrimp in their shells for the best flavor. This practice is messy and inconvenient at the table, especially in a mixed dish like this month’s recipe. A viable alternative is to peel and devein the shrimp before adding them to the dish:

1. Place the frozen raw shrimp in cold water to thaw;

2. Remove the telson, the small pointed section at the top of the tail fin;

3. Beginning underneath the shrimp by the swimming legs, peel away the shell;

4. Pull gently on the tail fin to remove the remainder of the shell, leaving the tail meat attached to the peeled shrimp;

5. Put the shrimp on a cutting board; make a quarter-inch deep incision along the back of the shrimp. This reveals the vein, removed easily using the tip of your paring knife.

No other protein source cooks faster than shrimp — taking only a couple of minutes. Exposing shrimp to just enough heat to turn the flesh pink and pearly opaque preserves the flavors.