Setting boundaries before setting the table may help your family with holiday harmony.

This is the time of year when many families gather around holiday tables. Traditions vary, even the definition of delicious food changes depending on family culture and background. Many delicacies make their once a year appearance—some with fond memories, some with excited anticipation.

One such holiday feast is a standout in my memory. We gathered at my parents’ home—the house I grew up in. It seemed like any other year. My mother, sister, and I were the chief cooks, busy in the kitchen while our children played nearby. The youngest of the cousins was my 3-year-old son.

My family’s holiday menu was probably typical Midwestern omnivore fare: roast turkey with bread stuffing, an extra dish of dressing made with oysters (my dad’s preference), mashed potatoes, giblet gravy, candied sweet potatoes, green bean casserole, apple salad, a tray of pickles and olives, and cranberry sauce. And homemade yeast rolls and butter. Following dinner: a smorgasbord of pies. As usual, the feast was served in the middle of the afternoon with appetizers beforehand to stave off hunger.

Now take a moment to view this scene through the eyes of the young cousins: hard-to-swallow meat, soggy bread, gravy with strange stuff floating in it, sticky orange lumps mixed with white stuff, gooey green beans with brown stuff on top, gooey apples, strange-smelling lumps, off-green balls with red stuff sticking out, and sour red jelly. While I cannot recall what my nieces and nephews had on their plates—I probably didn’t notice—I remember that my three-year-old son allowed a few green beans, small bits of turkey, a buttered roll, and a tablespoon of mashed potatoes on his plate. But all he ate was the buttered roll.

My son, always a good eater, was experiencing a whole tableful of new foods. Factor in the mid-afternoon mealtime—he had filled up on cheese and crackers from the appetizers at his usual lunchtime. So he landed at the holiday family table not really hungry and less adventuresome than usual. Despite not eating much, he stayed right there taking in the sights and sounds of the family meal.

Then came the pies. Others at the table were having pie. And that was a familiar food to my son. He wanted some, too. No big deal, right? Right, until a family member asked emphatically why in the world would I allow him to have pie when he didn’t eat his dinner? I recall vividly when the critique turned to my parenting abilities and I was called a bad mother.

I was as sure then as I am now that I was not a bad mother. But I was in the wrong. The wrong was not that I allowed pie after my son did not eat the other foods on his plate. The wrong was in not informing the adults at the table about how I approach child feeding. While I was a relatively new mother, I was well-versed in feeding dynamics. I worked as a pediatric nutritionist in the College of Human Medicine at Michigan State University. I practiced at home what I taught parents I encountered in the pediatric clinics: when parents do their jobs with feeding, children are able to do their jobs with eating. My son and his dad and I had a good understanding of our roles in feeding and at the table. We provided him with food in a timely manner and he chose what he wanted to eat of that food and how much. This principle is Satter’s division of responsibility in feeding.

Yet I had not prepared the other adults at the table for a self-directed three-year-old. And that could have saved this family gathering from its impending disaster.

Let me share with you a few of the lessons I learned on that fateful day:

When we eat together, we share more than a meal.

Weight stigma and diet culture will likely continue on, but they do not have to exist in our homes.

END_OF_DOCUMENT_TOKEN_TO_BE_REPLACED 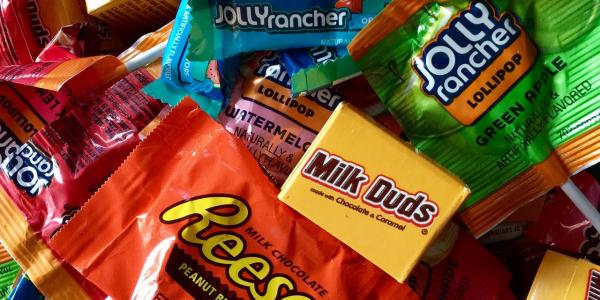 Halloween is lots of fun until it comes to managing the candy haul.

Variety may be the spice of life but what if your kid won't even try it?