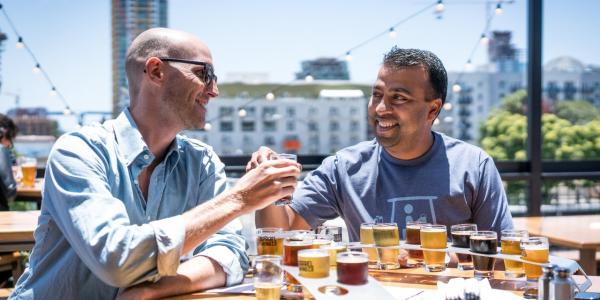 Binge Drinking
Binge drinking is drinking heavily in a short space of time to get drunk or to feel the effects of the drink. The amount of alcohol that someone needs to drink in order to be classified as “bingeing” is a bit hard to define, but the standard defined by the National Institute on Alcohol Abuse and Alcoholism (NIAAA) is drinking more than the daily recommended drinking limit.

Now, that might not sound like too much, but remember that one standard drink is 0.6 fluid ounces of alcohol, which is how much is in one can of regular beer (with an alcohol content of 5%). So, drinking 5 standard drinks is consuming 3 fluid ounces of alcohol. Drinking a pint is like drinking a bottle and a half of beer, and if it’s a stronger beer like a craft beer, the alcohol content is typically even higher for every one beer.

Drinking that much alcohol in a short space of time – let’s say one hour – will raise your blood alcohol content (BAC) quickly because you’re not giving your body time to metabolize what you're putting in there, making you more drunk very quickly. Drinking the same amount of alcohol over the course of an evening will not have the same effect on your BAC.

"But," you say, "that’s the point!" You drink that much and that quickly because you want to get a quick buzz on. The trouble is that studies show that binge drinking actually may be significantly worse for your health and well-being than drinking small quantities more frequently. Here are some examples:

Alcohol Use Disorders
Drinking that becomes problematic is given the diagnosis of “alcohol use disorder” (AUD). AUD is a chronic brain disease characterized by habitual alcohol use, loss of control over alcohol consumption, and a negative emotional state when not using alcohol (National Institute on Alcohol Abuse and Alcoholism, 2018).

Professionals diagnose AUD by referring to specific criteria outlined in the Diagnostic and Statistical Manual of Mental Disorders (DSM) compiled by the American Psychiatric Association (APA). In May of 2013, the APA released the 5th edition of the DSM which, as of this writing, is their most current edition. In terms of diagnosis, the DSM-5 categorizes AUD on a continuum of mild, moderate, or severe (American Psychiatric Association, 2013).

Symptoms of Alcohol Use Disorder
The following are the 11 symptoms published in The Diagnostic and Statistical Manual of Mental Disorders (5th ed.; DSM–5; American Psychiatric Association, 2013) that professionals utilize to determine if an individual may have a problem with alcohol.

Mild, Moderate, and Severe Alcohol Use Disorder
Professionals determine the severity of the alcohol use disorder by completing a full clinical assessment and adding the number of symptoms present.

Thus, an individual who experiences cravings for alcohol has missed work due to alcohol use and has given up social and activities due to the use of alcohol could be diagnosed with Alcohol Use Disorder-Mild (American Psychiatric Association, 2013).

What to do if you think you have a problem
If you think that you might have an alcohol problem, talk with your family doctor or primary care provider. They will be able to help you sort out what kind of help you might need, and ensure that you are physically taken care of in the process.

If you are wondering if you have a problem and you are an MSU employee, you may want to consider making an appointment with one of the counselors at the Employee Assistance Program. They will be able to talk with you about your drinking pattern and help you reflect on what kind of relationship you want to have with alcohol.

If you don't work for MSU and are interested in help, please see our Resources section for information about the kinds of help that's available to you in your community.

To learn more about the warning signs check out the next article in the series.