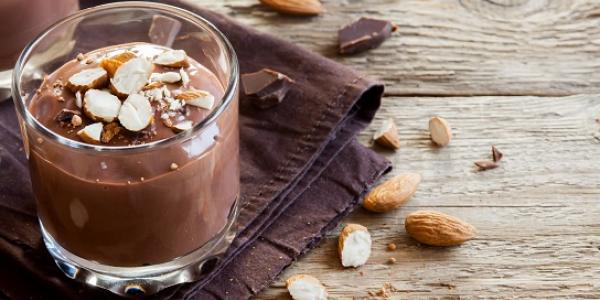 Place the chocolate and almond milk in a double boiler or a heat-proof bowl set over a pan of simmering water. Heat until the chocolate is melted. Cool while preparing the aquafaba.

Before opening, shake the can of chickpeas vigorously. Open the can and drain through a fine-mesh strainer, collecting the liquid in a bowl or cup. Reserve chickpeas for another use. In a medium bowl or the bowl of your stand mixer, whip the aquafaba, sugar, and cream of tartar using the whisk blade of your electric mixer or immersion blender. Continue to whip until the product has more than doubled in volume and has reached stiff peaks. This may take up to 5 minutes.

Portion the mousse into some cups or vessels for dessert and let chill for at least 4 hours.

Finding an acceptable egg substitute had pretty much stumped the culinary world. Then in March of 2015, a website announced the discovery of aquafaba. There was nothing new about bean cooking water—we’ve been rinsing it down the drain forever. But using it as an egg replacer? Now that was revolutionary!

It all started with a curious cook who wondered about uses for the foam on her pot of beans. Eventually, a software engineer from Michigan whipped legume cooking liquid into a stiff foam. The development of aquafaba, from discovery to recipes, was a collaborative process amongst amateur cooks that happened on the Internet.

Aquafaba is easy to find. Simply drain the liquid from a can of beans or a container of tofu. Voila! Aquafaba! Chickpeas are the best choice; shake the can before opening to get the starches distributed in the liquid. Another source is to cook dried chickpeas; reduce the cooking liquid until it’s the consistency of raw egg white. If you’re more into convenience than cheap, you can buy powdered aquafaba. But wouldn’t that be just ”faba”?

Aquafaba keeps in the fridge for 5 to 7 days. Frozen-then-thawed aquafaba whips up just as well as never-frozen. For convenience, freeze it in 1-tablespoon portions in ice cube trays, then transfer to a freezer bag.

Three tablespoons of aquafaba replaces each whole egg in a recipe. As a viscous liquid, it works well as a binder in cookies. It becomes magical when whipped into a stiff, fluffy foam. Sugar stabilizes the foam, but not as well as cream of tartar. Sugar or not, add ¼ teaspoon cream of tartar per ½ cup aquafaba before whipping. Cream of tartar shortens the whipping time to reach stiff peaks and it keeps the liquid from seeping out.

Aquafaba has taken off in vegan and egg allergy cooking. In the short time since discovery, aquafaba is replacing eggs in baked goods, cream pies, and pudding, as well as savory products like mayo, butter, and cheeses.