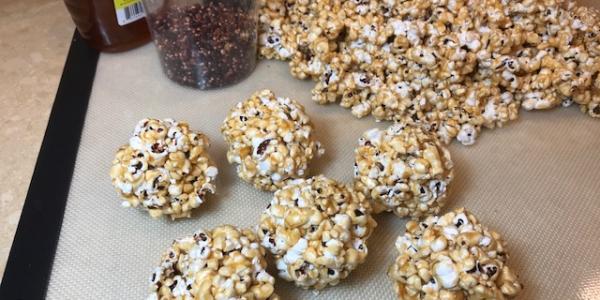 Make the popcorn: In a large pan with a lid, warm coconut oil over medium-high heat. Place 3 popcorn kernels into the oil and wait for them to pop. After they pop add the rest of the kernels to the hot oil, put the lid on the pan, and remove the pan from the heat. Wait 30 seconds. Return the pan to the heat with the lid set slightly ajar. Once the kernels start to pop, lightly move the pan around on the burner. Once the popping pretty much stops, dump the popcorn into a large bowl. You will need 12 to 16 cups of popcorn for this recipe.

Make the syrup: In a heavy sauce pan over medium-low heat, warm the sugar, water, honey, and molasses for about 5 minutes and stir just until the sugar has dissolved. DO NOT stir or shake the pan anymore. Over medium-high heat, bring syrup temperature up to 245 - 275°F. The longer you boil the syrup, the harder the popcorn balls will be. The syrup will turn a deep amber color. Remove pan from the heat. Immediately add all the butter at once; be careful as it will have a tendency to bubble up. Add the salt and vanilla to the mixture. Whisk thoroughly.

Form popcorn balls: Pour the caramel mixture over the popcorn and stir well with a wooden spoon or silicone spatula. Lightly grease your hands or put on food-quality disposable gloves. As soon as the mixture is cool enough to handle, quickly shape into 3” balls. Dip your gloved hands in cold water occasionally to prevent the mixture from sticking to your hands.

Popcorn can stake its claim as one of the first native vegetables in America. Archeologists have evidence that indigenous tribes popped corn in the embers of their fires long before Europeans arrived on the continent. In 19th century America, popcorn was widely used as a breakfast cereal and as an ingredient in soups, salads, and confections such as molasses-sweetened popcorn balls.

In modern times, we have moved away from the fire and now primarily prepare our popcorn in the microwave. The stovetop method described in this month’s recipe is nearly as quick and more economical. Two Tablespoons of kernels makes 1 quart of popped popcorn and costs just 15 to 20 cents. Additionally you get the freedom to season your popcorn however you want.

Popcorn kernels are seeds with a hard skin on the outside that traps moisture on the inside. As the kernels are heated, the moisture turns to steam, expands, and eventually pops the outer skin forming uniquely-shaped pieces. Hull-less varieties do have a hull, a requirement for popping to happen, but the hull is soft and breaks into fine pieces when popped.

Henry David Thoreau described popcorn as the perfect winter flower, a poetic description of butterfly popcorn. Butterfly is one of two main popcorn types. The butterfly type makes large, fluffy pieces with wings attached to a round, smooth center. Of the many varieties of butterfly popcorn, yellow is the most popular producing the biggest popped corn.

The other main type of popcorn is called mushroom because it pops up compact and round with a textured surface. Mushroom popcorn is less likely to break. It’s an excellent choice when adding a coating such as caramel.

Store your popcorn kernels in a tightly sealed container in a cool place but not in the refrigerator, to maintain proper moisture content. Pop it up within a year. Shouldn’t be a problem. Movie night anyone?