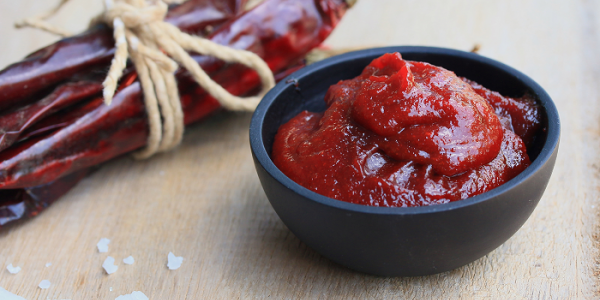 Put ingredients into the bowl of food processor. Blend until smooth. Brush sauce on food and let marinate for 4 hours before grilling. Serve hot.

Every cuisine has a key ingredient—the pillar of memorable flavor. Gochujang (pronounced gō-choo-chjong) is just such an ingredient in Korean dishes. Gochu means red chile pepper and jang means soy fermented paste. Put it all together and you’ve got gochujang, a fermented red chile paste.

Korean gochu has been cultivated on the Korean peninsula for centuries if not millennia. Korean gochu is distinctly different from Mexican and Thai chile peppers. The gochu used in traditional Korean foods must be originally from Korea. Good reason for being a stickler about this: most other red chile peppers are too spicy. For foods to ferment, the SHU (Scoville Heat Units) has to be less than 1,000. That’s quite mild as hot peppers go.

Gochujang is a seasoning paste made from Korean red chile peppers, glutinous (sticky) rice, fermented soybeans, and salt. The chile peppers provide a deep, piquant flavor with just the right amount of lingering heat. Add umami from the fermented soybeans, a touch of sweetness from the sticky rice powder, and a certain amount of earthy tang that comes from fermentation and you have a unique and complex flavor combination. No wonder this Korean cooking staple is gaining popularity outside of traditional Korean cooking.

While gochujang can be made from scratch, it’s quite a process. More often, it’s purchased as a ready-to-use product. You’ll find it in most Asian markets as well as the international aisle of larger grocery stores. Mostly it’s sold in small red tubs. Brands seem to have varying heat levels so check the package. You may also want to use a bit of caution by adding it gradually to your dish, tasting as you go.

Gochujang is a go-to main ingredient in traditional dishes such as bibimbap and spicy rice cakes, and straight-up as a condiment—veggie dip anyone? It’s gaining momentum in all kinds of dishes outside Korean cuisine, often as a riff on a familiar food such as Chef Kurt’s Korean Barbecue Sauce.