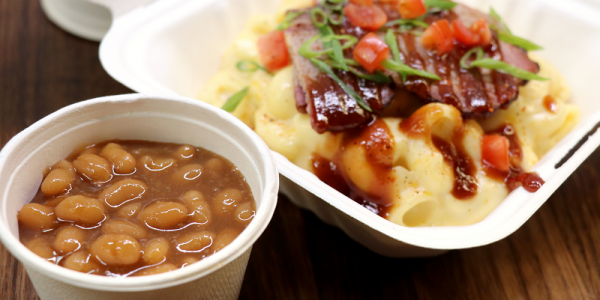 Put in preheated oven and bake for 2 hours. Serve warm.

These are really good as leftovers, served warm or cold.

Which plant family provides nourishment for much of the world? If you said pulses from the legume family, you’re right. Pulses, also known as beans, is the answer.

One of the most ordinary of beans is the navy bean. Not blue as their name might imply—no, navy beans are creamy white. This little bean is native to the Americas, hardened and strong, able to endure severe temperatures. With assets like these, it’s no wonder they made it on board naval vessels where cooks have been serving them to sailors since the 19th century. And that’s how navy beans got their name.

Among beans, navy beans have an especially high amount of indigestible starch, which the human body cannot convert to absorbable sugars. The starch enters the far reaches of the intestine (colon) where resident bacteria do their job. The by-product is gas, lots of gas. Just think of those sailors, gas-powered and puttering along.

While bean-related flatulence can’t be cured, it can be reduced. Some say to soak, drain, and rinse the beans; then start with fresh water for cooking. The problem with this method is that it leaches out nutrients and flavor. Another method is to cook beans thoroughly. Several hours on the stovetop or in a slow cooker will break down those indigestible starches. As will pressure cooking. In our hurry-up world, pressure cooking may be just the ticket. After washing your dried beans, put them in the pressure cooker with four times the amount of water plus salt and aromatics such as garlic and herbs. Bring to high pressure and cook for 30 minutes. If not soft and creamy, return to pressure for another 5 minutes. If you have a multicooker (electric pressure cooker) follow the instructions that came with it.

Navy bean soup has been a fixture in the US Senate cafeteria for nearly a century. Its menu name is Senate Bean Soup. Baked beans, also called barbecue beans, is another navy bean classic and the mainstay of summer cookouts. If you don’t already have a favorite, give Chef Kurt’s easy recipe a try.