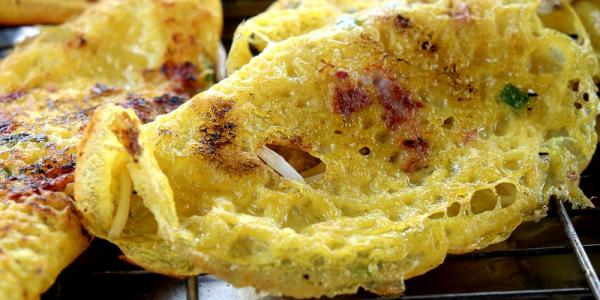 Mix sorghum flour, turmeric, scallions, and salt in large bowl; set aside. Combine water, coconut milk, and eggs in a medium bowl; mix well. Pour water ingredients into the dry flour mixture. Whisk to combine. Set aside to rest for a half-hour, preferably overnight in the refrigerator.

Heat a skillet over medium heat; swirl a generous teaspoon of oil in the skillent, the add about 1/2 cup of batter to the skillet, starting from outside working towards middle. Swirl pan around to form thin crepe. Let cook over medium heat for 3 - 4 minutes. Cover pan and cook for additional 2 minutes. Remove from pan serve immediately.

If using fillings, add small amount to the pan before pouring in the crepe batter, cooking the pork, shrimp, and/or onion in hot oil in skillet. Other ingredients that need only to be warmed can be added just prior to pouring in the batter. Rather than cooking in the crepe, fillings may be cooked separately then rolled in the crepe before serving. Serve with sauce for dipping.

Sorghum is food for the future. As with most plants, it converts energy from the sun into food energy. Added benefit for sorghum: it does this with one-third less water than similar crops.

An ancient grain originating in India and Africa, it continues to be a staple crop, mainly grown for human consumption. In the United States, sorghum is enjoying a surge in popularity. Why all the hoopla over a grain that’s been around for millennia? Well, it’s economical to grow, has a hearty texture, has a pleasantly nutty flavor, and it’s gluten free.

Sorghum and corn plants look a lot alike. Sorghum has broad leaves with a thick stem coming up through the center with a grain head attached at the top. The sorghum family includes several kinds of plants. While the plants look similar, they have very different uses:

This month, grain sorghum is featured as flour made into unleavened bread. Prominent are its nutty, slightly sweet flavor.

Next time you have movie night, pop a surprise for your guests: put 2 teaspoons oil and ½ cup whole grain sorghum in a hot pan with tight-fitting lid. Shake often. Just like popcorn, serve with butter and salt or other seasonings.