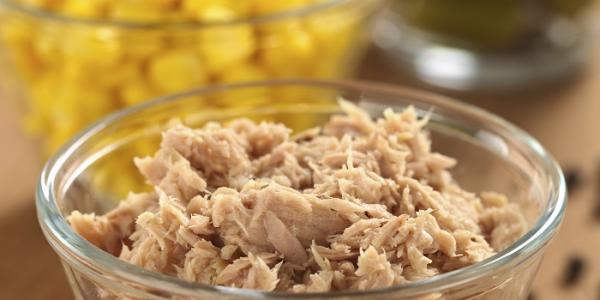 Lightly warm tortillas by placing on hot grill or skillet for 30 seconds. Place tuna mixture on corn tortillas and add toppings as desired.

If you think there’s something fishy about canned tuna, you’re right. On the surface, it seems simple enough—fish in a can. But descriptions on the label could make your head swim: chunk light, solid white, in oil, in water, no drain, select, prime, gourmet, in the can, in the pouch—how do you choose?

The two main categories—white and light—are based on species. Only albacore tuna can be labeled white. All other tuna, usually yellowfin, skipjack and tongol, are labeled light tuna. Consider these factors when deciding whether to buy white or light:

Safety. Tuna are high on the food chain and are often harvested when they are older and bigger accumulating chemicals such as mercury as they grow. You can safely eat canned tuna several times per month according to the Eat 8 guidelines. Skipjack and tongol are lowest in mercury content. Albacore tuna has the highest mercury content, on average twice as much as light tuna.

Fish oil. Canned tuna varies widely in omega-3 fatty acid content. While albacore is higher in omega-3s than other tuna, the canning method makes the bigger difference. The main three tuna brands cook the fish before placing it in cans which results in the loss of most of the oils. The oils are collected and sold to make fish oil supplements. A newer method of packing raw tuna in cans and then cooking it only once when the cans are heat processed is being used by some smaller fish canneries. This method results in moist tuna that is much higher in omega-3s.

Quality. Canned tuna is nothing like fresh, but it doesn’t have to be tasteless and dry. Carefully conducted taste tests by the Health4U staff and Cook’s Illustrated chose brands that raw-pack the tuna. These brands are labeled “hand-packed” and list tuna as the only ingredient.

You may already have a favorite canned tuna. If not, give our winners a try.