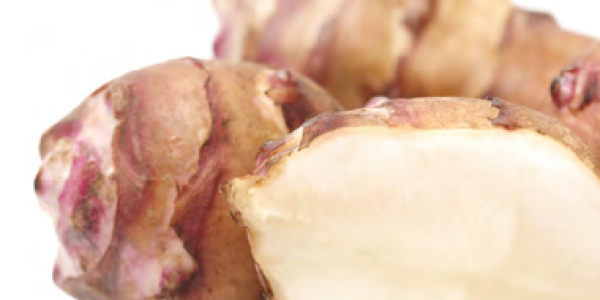 Peel sunchokes and put directly into water after they are peeled to keep them from turning dark.

In a medium saucepan, bring 3 quarts of water with salt added to a boil. Add sunchokes to the pan, bring the water back to a boil, and then reduce the heat to medium low. Cook for about 15 minutes or until they are almost fork tender, slightly undercooked. Remove from the heat and drain. Move sunchokes to cold water to stop the cooking process.

Place sunchokes on a cutting board and with a flat spatula, smash them to about ¼ to ½ inch thick.

In a non-stick skillet, heat olive oil over medium-high heat. Place the sunchokes into the oil and then put in the garlic, thyme and rosemary and let cook until brown, about 4-6 minutes. Flip the sunchokes and continue to cook for an additional 4-6 minutes.

Remove from the oil and season with salt and pepper to taste.

Sunchokes have a distinctive flavor that is nutty and delicately sweet. Like potatoes, sunchokes are a starchy root vegetable but different in that their carbohydrate is mainly inulin (not to be confused with insulin). Inulin is not easily digested in some people giving rise to yet another name for this tuber—fartichokes. Best to take the cautious approach and start with small amounts if you never eat them before. The culinary benefit of inulin is a smooth and pleasant mouth feel.

You will find sunchokes in the produce department of most supermarkets. Choose plump-looking tubers. Avoid any that are sprouting, green tinged, shriveled, or molding. Wrapped in heavy plastic, they will keep in the refrigerator for up to two weeks.

To prepare, scrub them clean using a vegetable brush under running water. They do not need to be peeled. If you peel or cut into them, place them in a bowl of water with lemon juice or vinegar added to keep them from tuning dark. Served raw, they add crunch similar to water chestnuts. Sunchokes sliced thin and cooked in oil or butter until golden brown and crisp makes a delicious appetizer or side dish. Steaming or boiling is an option but don’t expect them to cook evenly—some will remain firm while others soften.