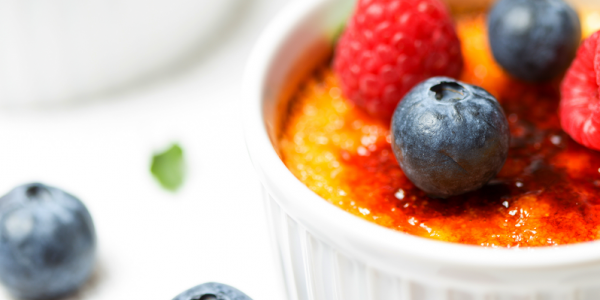 To make your own yogurt:
Begin by sterilizing equipment with boiling water. Sanitize your work surface. Fill a large bowl or sink with ice water.

Place milk in large pot and heat over medium heat stirring occasionally to prevent skin from forming on the milk’s surface. When milk reaches 185°F to 195°F, remove from heat and place pot in ice bath, stirring occasionally until the temperature drops to 110°F to 115°F. Remove pot from ice bath. Place plain yogurt in a small bowl; stir in about a cup of the warm milk. Add to the pot of warm milk and stir gently until thoroughly mixed.

Pour mixture into yogurt maker container or insulated bottle (warmed with hot tap water). An alternative method is to wrap the covered pot in clean towels and place on heating pad on warm setting. Incubate at 110°F to 115°F for 5 to 10 hours. Do not disturb during incubation period.

Place 3 to 4 oz. yogurt in each ramekin. Top with raw sugar. Use torch to caramelize the top or place under broiler. Serve as is, or with your favorite fresh berries.

The first yogurt most likely came about by accident. So the story goes, a few hours after milking the cows, a herdsman peered into the carrying container to find thick curds instead of fresh milk. Remarkably, yogurt-making is that simple. Simple yet complex—there’s some pretty spectacular chemistry going on.

Fresh milk naturally contains lactic acid bacteria, so named because of their unique ability to digest lactose (milk sugar). When left in a warm environment, these specialized bacteria convert lactose into lactic acid. As the milk becomes acidic, the transformation begins. Milk’s two proteins separate—the curd proteins, also called caseins, clump together to form a semi-solid mass; the whey proteins remain mixed up in the liquid. Meanwhile, the acidic environment suppresses the growth of other bacteria and keeps the milk from spoiling. And there you have it—pleasantly tart yogurt.

In much of the western world, yogurt is served sweet. Traditionally, though, unsweetened (plain) yogurt is the norm, used in savory applications. Yogurt is so versatile:

Traditional lore and medical studies claim an extensive list of beneficial effects of fermented dairy products. Every spoonful of yogurt is teeming with billions of bacteria ready to re-cultivate your inner ecosystem. A daily boost may be worth the effort—and pleasure.
by Peggy Crum, MA, RD