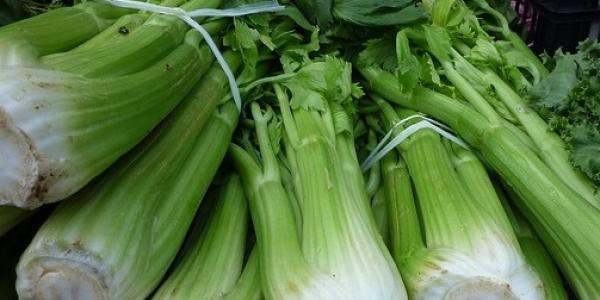 Bring a large pot of salted water to a boil. Wash and trim asparagus. Blanch in boiling water for 45 seconds the remove to ice water. After the asparagus is chilled, shave into long strips with a vegetable peeler. Keep cold in refrigerator until ready to assemble the salad.

Wash and dry celery. Grate on the large holes of a box grater.

Place walnuts on cutting board and press them with the side of the chef’s knife to slightly crush.

In small bowl, place 1 Tablespoon of lemon zest and juice from ½ lemon. Add olive oil and whisk together. Add salt and pepper to taste.

After millennia in the Chinese medicine cabinet, celery finally made its debut in the kitchen in the 18th century, used almost exclusively as a seasoning. There are at least two reasons why celery is still relegated to this slender category: strong flavor and strings. Both can be addressed through proper use of the whole bunch.

For instance, when you purchase celery to add crunch to a salad or flavor with a mirepoix, use the herbaceous-flavored outer stalks for this purpose. Hang on to those mild, tender inner stalks, often called the celery heart, to take center stage in a recipe such as Chef Kurt’s Celery and Asparagus Salad.

Buying celery is a snap. It’s always available in the produce aisle and often makes an appearance at farmers markets. Choose a bunch that looks crisp with tight compact stalks and pale to bright green leaves. Don’t be concerned if it is has a lot of dirt at the base. That’s inherent in growing celery. In fact, the muck farms in the Kalamazoo area, where Pascal celery was first grown in 1874, offer perfect growing conditions.

Resist the urge to wash your celery until you’re ready to use it. Instead, wrap the whole bunch in aluminum foil and store it in the refrigerator. Celery continues to produce the ripening hormone ethylene even after it is harvested. Since foil is not gas tight like plastic, the ethylene escapes protecting your celery from over-ripening. Wrapped in foil, celery will stay green and crisp for two weeks. If your celery goes limp, revive it by cutting an inch from both ends of the bunch and placing it in ice water for 30 minutes.

The strings? Don’t bother removing them if you’re chopping, slicing or dicing. For eating raw, use the inner ribs or give the outer stalks a light scrape with a vegetable peeler or paring knife. De-strung, it remains sturdy enough to fill with peanut butter, perfect for ants-on-a-log.