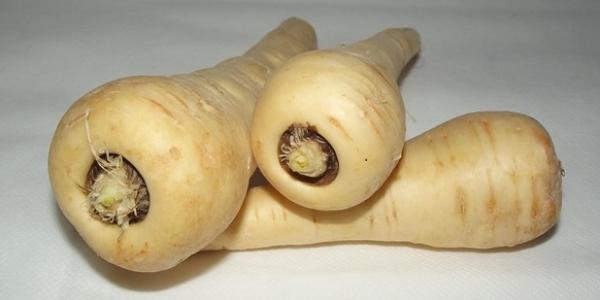 Cook the parsnips and pears separately in boiling salted water until they are tender enough to mash with a fork. Drain and then lightly dry in a warm oven over low heat until excess moisture has cooked away.

Combine the pears and parsnips and puree them using a food processor.

As the processor is on, slowly add the warmed heavy cream to give the mixture a creamy and smooth texture.

Stop the processor and then add the spices and the salt and white pepper to taste.

Keep warm and serve right away.

Can you dig it? During parsnip’s peak season, hardly! Parsnips have bragging rights as the most durable of the winter vegetables. They need a frost to sweeten up. In fact, the colder the temperature, the more the parsnip converts its starch to sugar.

Since parsnips keep so well in the ground or root cellar, they are available fresh here in the North Country until early spring. Look for long, firm roots with a smooth skin. Small parsnips are the most tender, and medium-size parsnips give the most yield, but don’t pass up the largest ones. These whoppers sometimes have a woody core, which you just cut away, but the rest of the parsnip will be delicately sweet when cooked. Parsnips store best in a plastic bag in the refrigerator.

This starchy root vegetable resembles an ivory-colored carrot. But unlike the carrot, it is nearly inedible raw. Its best flavor, sweet and nutty, develops when it is cooked.

Prepare a parsnip the same as you would more familiar root vegetables—peel it like a carrot and cook it like a potato:

 Roasted: Peel parsnips and cut into equal size chunks. Toss with vegetable oil, salt and pepper. Roast at 400°F for 20 to 30 minutes, turning once or twice so that they brown evenly.

 Mashed: Mix with pears as in the featured recipe or try 3 parts parsnips to 1 part potatoes. Peel vegetables and cut into pieces; make the potato chunks about half the size of the parsnip chunks. Cover with cold water and add ½ to 1 teaspoon salt. Simmer until tender. Put the vegetables through a ricer or food processor or smash by hand. Add warm buttermilk, milk, cream or broth then beat until smooth. Add butter, salt and pepper to taste.