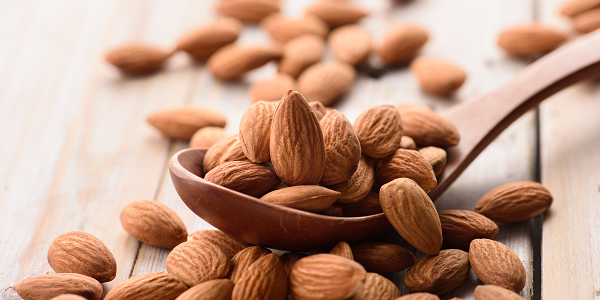 Place almonds in a dry skillet over medium heat. Toast until a light nutty aroma comes from the pan and the almonds have darkened slightly, 3 to 5 minutes. Remove almonds from the skillet and let cool.

Combine sugar and water in a non-stick pot; cook over low heat for 5 minutes. Sprinkle cream of tartar over the surface. Turn the heat up to medium and continue to cook, without stirring. Watch carefully and take the pan off the heat once the color is a nice caramel color (golden/dark brown), another 10 to 15 minutes.

Pour the sugar mixture onto a silicone baking mat that you have placed on a baking tray. Tip the tray slightly to cause the mixture to spread out without touching it. Sprinkle evenly with salt. Set aside to cool.

Put almonds into a food processor; pulse until well-chopped into very small pieces but NOT all the way to powder form. Remove from food processor bowl and set aside.

After the sugar mixture is well cooled, hard, and not sticky to the touch, break it up into pieces. Put the pieces into a food processor and pulse until a gritty sand-like powder is produced.

Preheat oven to 325°F. Spread the sugar-powder about ¼- to ½-inch thick on the silicone baking mat, in shapes if you want. The key is to have even coverage with no holes in the sugar-powder. Top with the finely chopped almonds. Place the tray in preheated oven for 2-4 minutes until sugar has melted again. Remove from the oven and cool. Serve with dessert.

It seems we’re more nuts about almonds than ever before. While it’s unlikely they’ll ever outsell the humble peanut, recent sales reports show that almonds are more than twice as popular as all other tree nuts combined.

Their popularity is by no means new. Native to the Fertile Crescent in southwest Asia, almond trees were among the first plants to be domesticated anywhere on earth, probably in Jordan in the 3rd millennium BC. Cultivation stretched westward to the Mediterranean and eastward toward India. Trade spread them from China to Europe. What was everyone so nuts about? Almonds were delicious and satisfying—that hasn’t changed. And versatile—useful in savory or sweet dishes, and adaptable to every cuisine.

Surprising to me, almond milk can be traced to the Middle Ages in Europe where it was in high demand. In times before refrigeration, it was important that almond milk did not spoil as readily as cow milk. But it was during the Lenten season each year, when meat and cow milk were not allowed, that the demand for almond milk soared.

The practice of toasting almonds has been around for a while, too. Dry heat helps release their essential oils and makes them more flavorful. It pays to be careful when toasting—or more to the point, it’s costly if you’re not! Burnt or scorched nuts are best placed in the garbage.

The safest way to toast nuts is in the oven. Go low and a little slow. Preheat your oven to 350 degrees, scatter whole almonds in a rimmed pan. Bake for 5 minutes, then shake the pan. Back in the oven for 3 minutes, shake; then back in the oven for 2 to 3 minutes. At the first whiff of a toasty, nutty aroma, pull them out of the oven. Cut one of your toasted almonds in half—it should be light brown completely through. Toasting develops the flavor on the inside, too. If you don’t use your toasted almonds within a week, keep in the freezer.