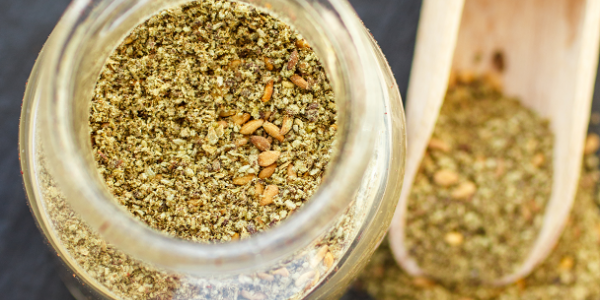 Preheat oven to 425°F. Toss the squash, carrots, and onions with ¼ c. of the vinaigrette. Spread vegetables in a single layer on a baking sheet and roast for 25-30 minutes. Watch the onions as they may get done sooner than the other veggies.

Lightly rinse the farro. Put farro and vegetable stock in a pot and bring to a boil. Reduce heat to low, cover, and let cook for 25-30 minutes. Move cooked farro to a large bowl.

In a sauté pan, toast the walnuts for a couple of minutes. Remove walnuts from the pan and set aside. In the same pan, heat 2 T. olive oil and sauté kale for about 5 minutes.

Mix the kale with the cooked farro. Toss with the rest of the dressing. Portion into serving bowls and top with the roasted vegetables. Garnish farro-vegetable bowls with walnuts, lemon zest, and a dusting of za’atar seasoning.

The aroma of za’atar “encapsulates the soul of the Old City,” according to Chefs Ottolenghi and Tamimi, authors of Jerusalem, A Cookbook.

Za’atar (pronounced ZAH-ter, rhymes with daughter) is a seasoning mix of dried herbs, sesame seeds, sumac, and often salt. Its use in the Middle East dates back to at least the 13th century. Confusingly, za’atar is also the name of the oregano in the seasoning mix, which is widely believed to be hyssop, the wild herb of biblical fame.

Like other regional seasoning mixes such as curry powder and Creole seasoning, za’atar has hundreds of variations, perhaps as many as there are families in the region. The exact herbs, spices, and proportions vary by region, culture, and family. Examples of regional variations include Jordan’s za’atar mix which is heavy on sumac, so much so that it looks red; and Lebanese za’atar which may include dried orange zest. Each country considers za’atar a matter of national pride.

Za’atar is an everyday seasoning, commonly found on Mediterranean tables like salt and pepper in the US. It’s often made into a simple paste for dipping and spreading. Mix equal parts za’atar seasoning and any good olive oil. Use as a dip for fresh bread or spread on pita and toast in the oven until crisp. Many eat za’atar straight out-of-hand or sprinkled on popcorn. From ancient civilizations to modern times, za’atar enhances everything.